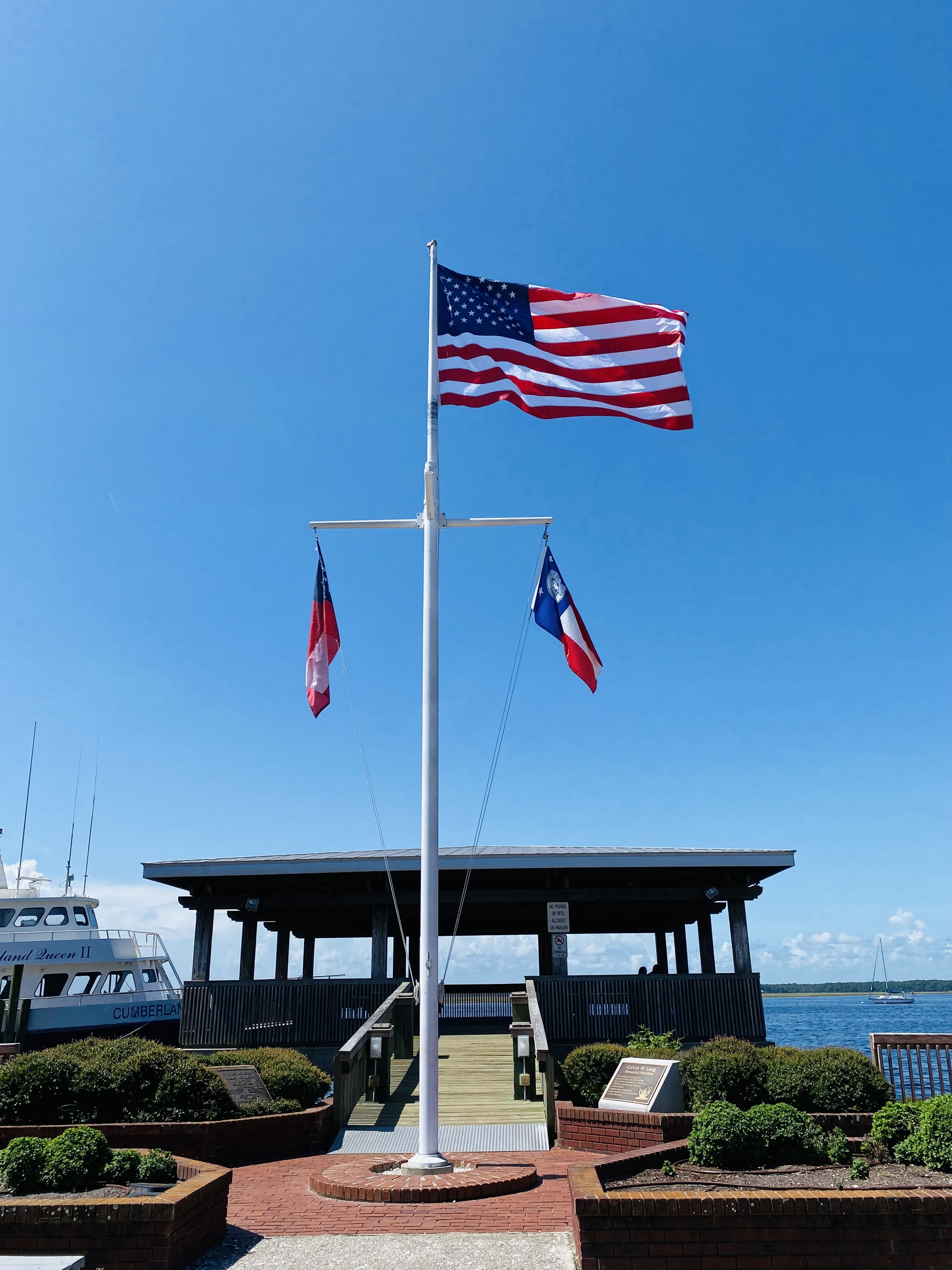 Dear friends had invited our family up to their lake house in North Carolina. We’d made the twelve hour drive up in one day, but decided to extend our trip with a stop along the way. Because we hadn’t planned ahead, we couldn’t be picky about accommodations. My criteria was simple: a comfortable place on any available body of water where we could catch a sunset. An exhaustive search turned up one house on the Florida-Georgia border.

As we pulled into the small Southern town of St. Mary’s, I took in the American flags waving from permanent poles in front yards, Christian churches every few blocks, pickup trucks with gun racks and the single color of person: white. It’s always a bit jarring to leave Miami and discover what’s right outside our multicultural, multi-religious, multinational flag-flying town.

We had encountered a similar vibe on a spur of the moment trip last year around this time.* Everyone was desperate to escape Covid-ravaged Florida, or so it seemed from the lack of available rentals in North Carolina. Determined to leave town, we hunted for a place with a mountain view. A modern cabin with a massive American flag out front popped up in Franklin, North Carolina, a town we also knew nothing about. 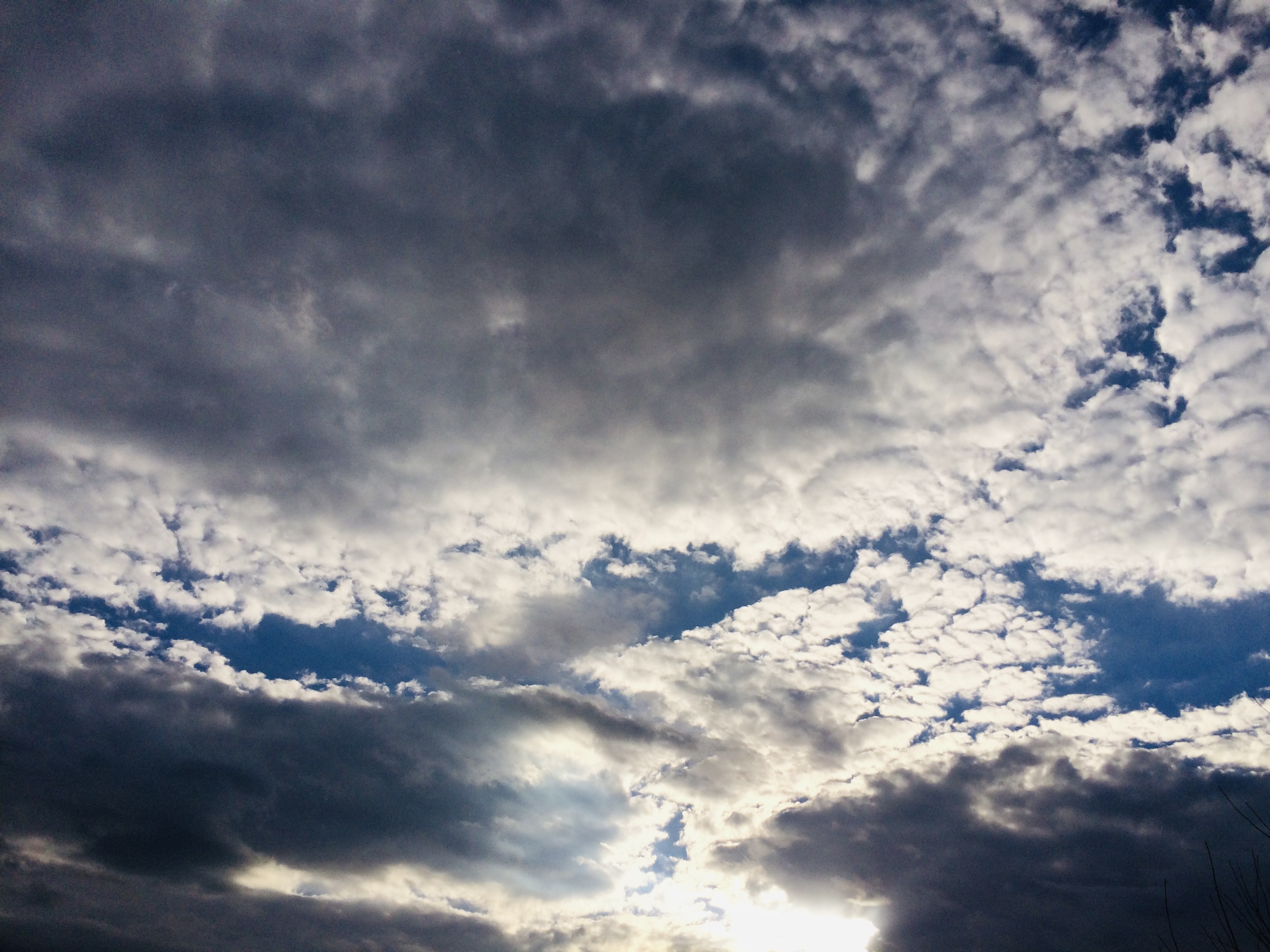 The morning after our arrival in Franklin, I took a hike around the mountain and snapped photos of wild flowers, the thick canopy of trees and unique cloud formations. I sent a photo to an old friend who shares my love of clouds.

“Where are you?” she asked over text. I told her about the last minute trip.

“We don’t do that,” she texted back. She explained that, as a Black woman from Jamaica, substantial recon was required before she traveled anywhere in the United States.**

“Even when my son drives back to his apartment after dark, I am a nervous wreck until he calls.” We’ve all seen the news reports that back up why she feels this way, but unless it’s your lived experience, it’s impossible to fully grasp. Like the difference between watching a hurricane on TV and having one blow the roof off your house.

My friend’s words came back to me as we located our rental in the mystery town of St. Mary’s, Georgia. American flags everywhere, the monster trucks, the occasional Trump 2020 sign, still up nearly a year after he’d lost the election. There’s no way she would bring her family here.As a Jewish woman, I felt mildly unsettled here but with my lily white, German-looking family members around, I felt safe.Not a luxury I imagined my friend would enjoy in this town.*** 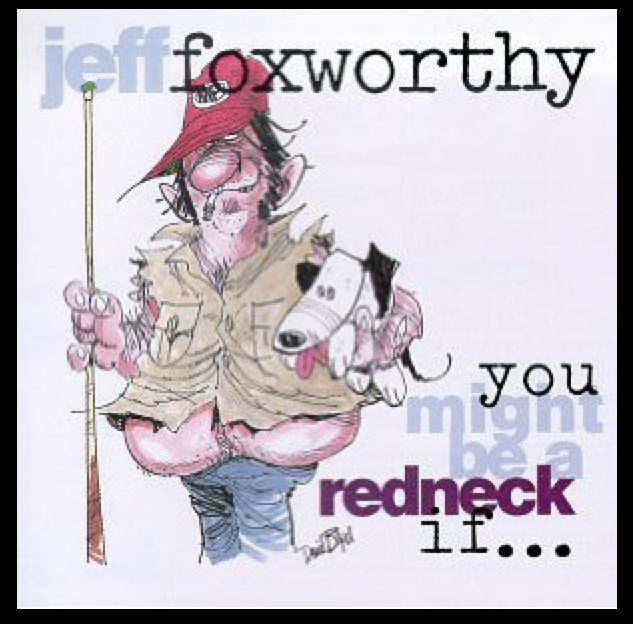 As is our custom with any new place, my husband and I set out to explore it on foot. We dropped our youngest son at the local skate park and walked around the neighborhood. Down a quiet street, a weather-beaten house with overgrown grass and all manner of appliances out front drew my attention.

“If you have no less than four refrigerators in your front yard, you might be a redneck,” I said, mimicking Southern comedian, Jeff Foxworthy, whose bit anyone with cable in the early nineties had seen. Mark laughed. Telling that joke made me feel a little bad but I didn’t dwell on it.

The next day, I asked my husband if he thought people who installed flag poles in their front yards were necessarily the same ones who supported the insurrection on January 6. During the last administration, the increased American flag-flying had seemed more aggressive than patriotic, particularly the huge flags affixed to the back of pickup trucks and boats.

“This is a military town, Elizabeth. That base takes up most of the property here.” I hadn’t considered that. The Naval Submarine Base adjacent to St. Mary’s spanned sixteen thousand acres. It was a safe bet that many of them had retired and bought property there. They’d been flag-flyers regardless of who was in office. 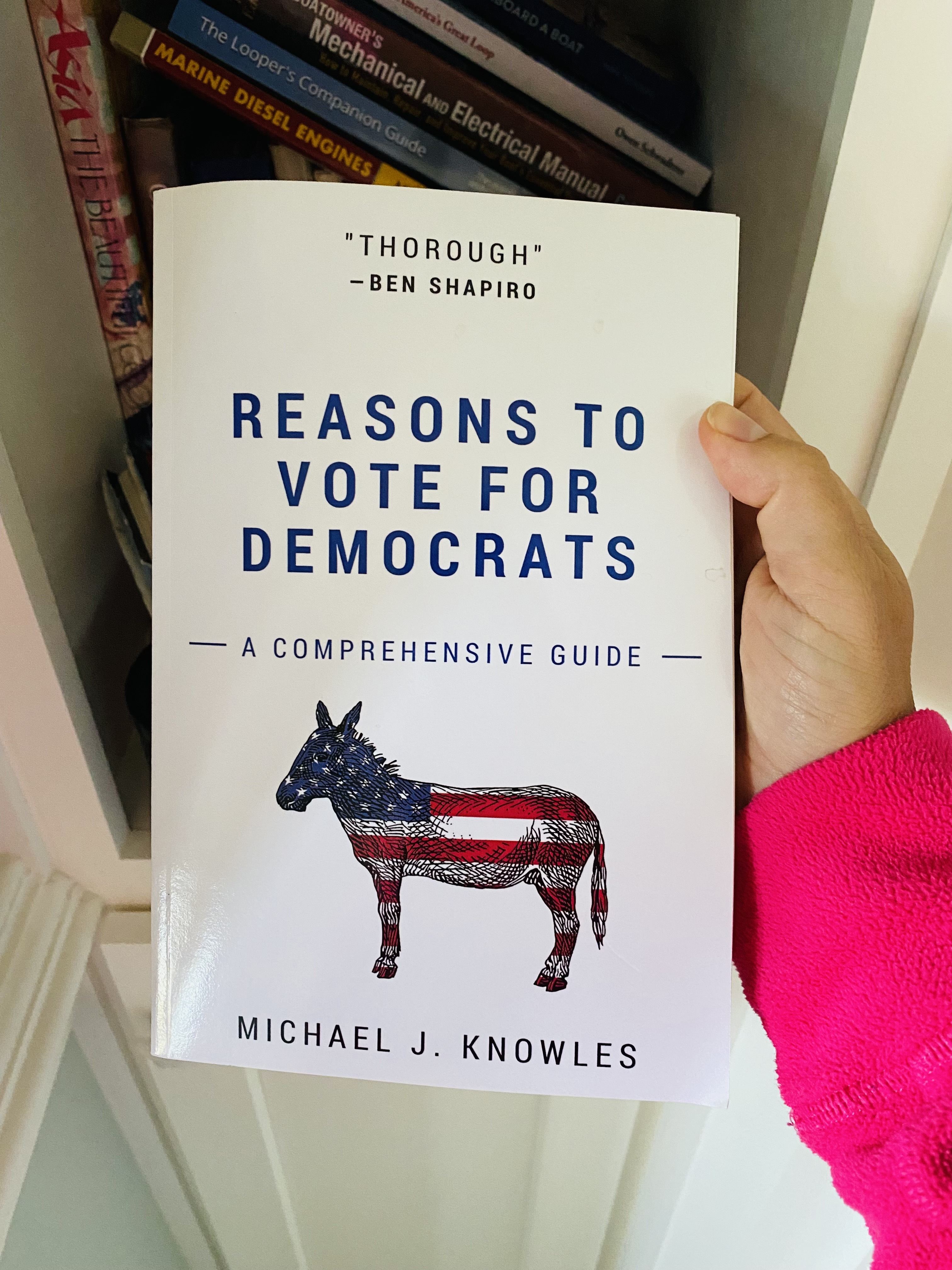 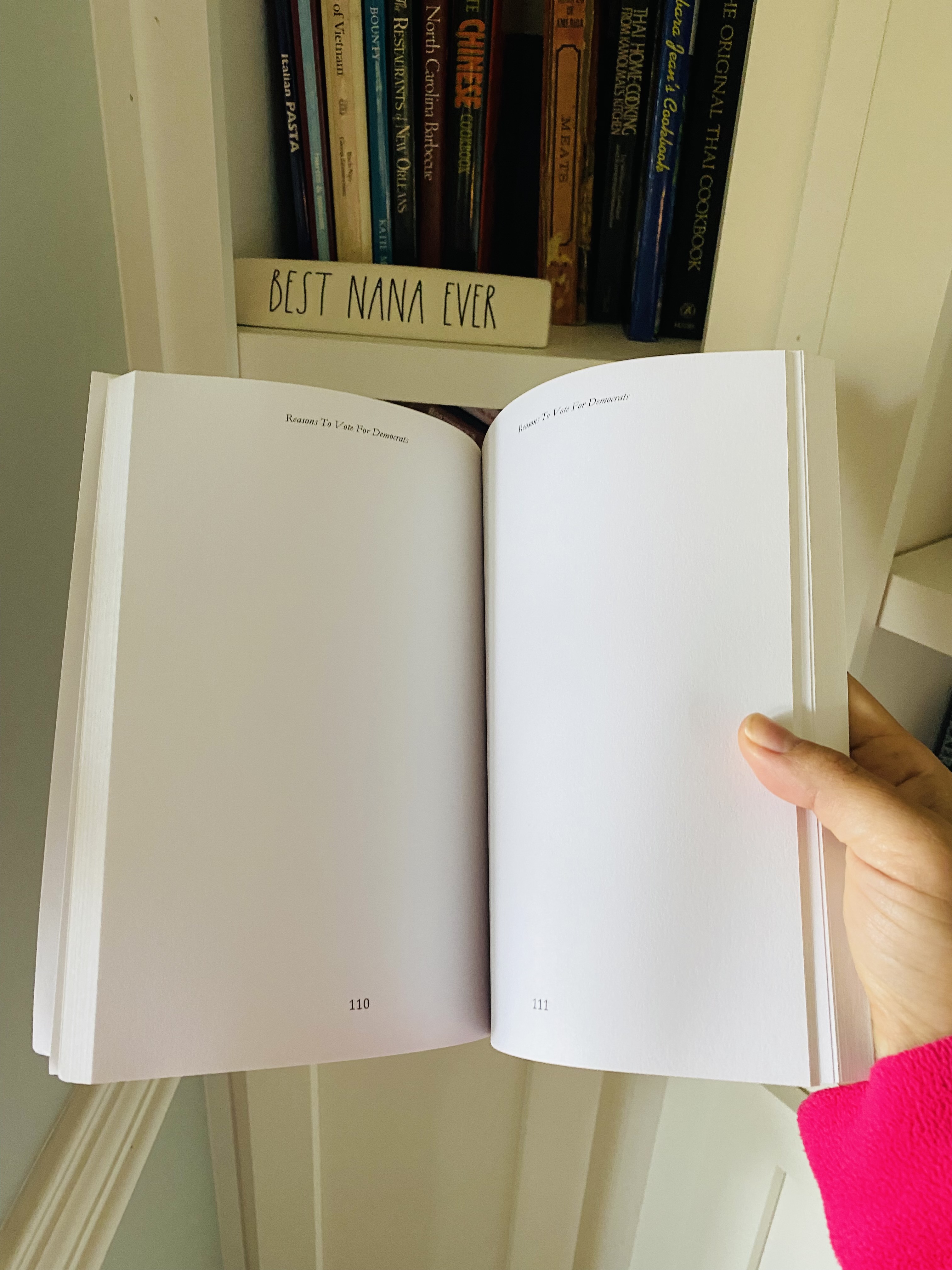 Back at the rental, I perused the bookshelves for signs of political affiliation. How do these people not care about offending paying guests?

And then, I began to see myself. Pre-judging everyone who lived here on outward appearances alone. On their own personal bookshelves, for pete’s sake. I had been guilty of the very thing I had assumed these white, American-flag flying townspeople were doing. I was certain they were all close-minded bigots despite knowing nothing about them.

I recalled the story of a Black Jazz musician who’d collected over two hundred Ku Klux Klan uniforms of men he’d befriended who’d then quit.**** He had started conversations in bars, bonded with them over music or whatever and then built on common ground. He’d had an open mind and treated them as equals. Conversely, I had shown up with a know-it-all attitude and a closed mind.

I thought more about my old friend and recalled how accepting she was of a wide variety of people at our firm. She was friends with everyone who was friendly to her. She gave people a chance. How would she ever feel comfortable traveling around the country if white people like me wrote off whole sections of the country and refused to engage? Wouldn’t it serve us all better if I changed my energy toward other white people who believed differently than I do?

The next afternoon, a Sunday, we waited for a table in the quaint little seafood restaurant our host had recommended. A number of Black families occupied several tables, enjoying the afternoon. Perhaps I didn’t know everything about this little town. If that jazz musician could keep an open mind and convert the freaking Klan, I could give this town and these people a chance too.

When you open yourself up to others instead of prejudging them, you honor all of our humanity.

WRITING PROMPT: Have you noticed prejudice in yourself? What did you do about it?

*You might be wondering why I’d frequent towns like this, given my discomfort. My thinking comes from an episode on the podcast SCENE ON RADIO, the Seeing White Series. https://podcasts.apple.com/us/podcast/scene-on-radio/id1036276968 If your education was anything like mine, it went light on racism in America. The researchers discussed how the South has the reputation for being the most racist place in our country. They went on to recognize systemic racism in “progressive” Northern cities, all manner of violent acts across the mild-mannered Midwest and clear evidence of it everywhere. It’s just not true that the South is the only place in the U.S. where racism exists. If I had wanted to spend vacation dollars in racist-free zones, I’d have zero choices, not even Austin.

***When the movie The Green Book came out, it was the first time many of us (me) had even heard of the guide book for Black motorists during the Jim Crow era. The Black middle class sought out car ownership in part to avoid segregation on other forms of transportation but that presented a whole other problem: where to get the car serviced, where to eat and stay for the night. Black visitors to certain all-white municipalities required any Black person to leave before sundown (“sundown towns”) or else face threats of violence. There’s no official guide book anymore, but the practice of sharing information about safe towns to visit is still alive and well.